Pride of the Genii 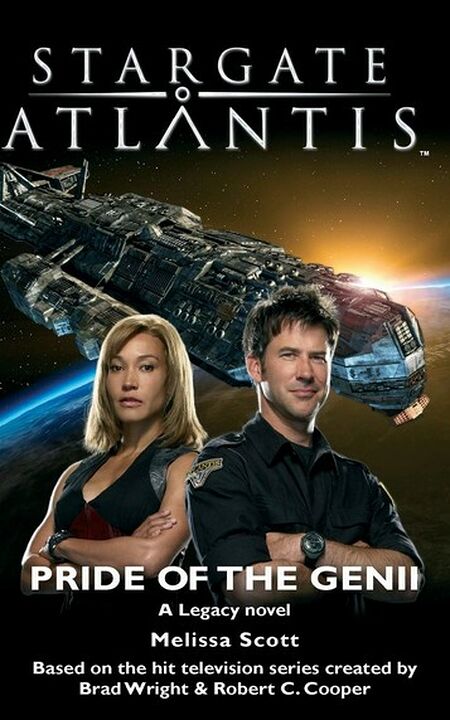 Pride before a fall...

As guests of Chief Ladon Radim, Colonel Sheppard's team witness the launch of the Genii's first starship - Pride of the Genii. Radim needs the Pride's first mission to be a success if he's going to control the hard-line opponents of his treaty with Atlantis. So when the ship disappears, he turns to Atlantis for urgent help. With the Pride out of contact, Sheppard's team must track her across the Pegasus galaxy, piecing together the events of her ill-fated maiden voyage as they race to find the stricken ship before time runs out for her crew - and for Chief Radim.

But as they navigate vicious Genii politics, mysterious illnesses, and hostile wildlife, the Atlantis team soon find themselves fighting alongside the crew of the Pride - for their survival and for the future of peace with the Genii...

It was sunny, for once, and technical teams were swarming over Atlantis's occupied buildings, seizing the moment of good weather to do repairs that had been neglected through the planet's long winter. It was, in fact, far too good a day to waste in yet another briefing, and John Sheppard was doing his best to get everyone through the agenda as efficiently as possible. He squinted at his tablet, displaying yet another set of schematics, and looked back at the main screen to see the same image projected there. Rodney McKay waved a hand at one of the structures beneath the North Tower.

"- might be able to pull some nonessential parts from here to test our ability to duplicate parts of the Ancient technology."

Out of the corner of his eye, John saw Radek Zelenka roll his eyes, but the engineer made no objection. Beside him, Ronon Dex was staring into space, his mind visibly on whatever he was planning to do after the meeting ended. John tapped his tablet, shrinking the image and returning to the agenda. "OK, Rodney, go ahead."

"I also think-"McKay stopped. "Wait, what did you say?"

John glanced at his tablet again, confirming the list. "Right. If no one else has anything..."

Ronon's chair scraped against the floor as he pushed back from the table, then stopped abruptly as another voice spoke.

"Actually, there is one piece of new business." That was Teyla Emmagan, sitting at the far end of the table. She gave him an apologetic smile. "Atlantis has received an invitation from Ladon Radim. It seems that the Genii are celebrating one of their major holidays - Foundation Day - and they would welcome a delegation from Atlantis. The Ancient warship that we recovered for them is to be involved, and I think they would like us to see it."

"They'd like to show off, you mean," John said. The Avenger - the Genii might have renamed it, but he couldn't think of it as anything but its Ancient name - was something of a sore point. Ladon Radim had backed them into a corner, so that they had not only been forced to initialize the Ancient systems for him, but to let him keep the Ancient warship. At the time, it had seemed safe enough, but the Genii had figured out a way to create an artificial ATA gene, and the ship had taken part in the battle against Queen Death with a mixed Genii and Lantean crew to handle the systems. "I don't suppose they said what they're doing with the ship?"

Teyla shook her head. "Unfortunately they did not. Though Chief Ladon was at his most persuasive."

"You can't trust them," Ronon said.

"Shall I play the message?" Teyla tipped her head to one side, not quite hiding her smile.

"Please." John leaned forward as the screen lit, static resolving to a neatly-bearded face above a faultless olive-green uniform. The Chief of the Genii smiled out at them. It was an expression John had always mistrusted, and he felt a chill on the back of his neck. The Genii always had a hidden agenda.

"We send greetings to Atlantis," Ladon said, "and extend an invitation for you to join us to celebrate Foundation Day. This is our traditional holiday celebrating the unification of various warring tribes under our first Chief. This year we are also celebrating the first independent voyage of the Pride of the Genii. As Atlantis was instrumental in helping us retrieve and repair our ship, we would like to demonstrate the use we've made of your generous assistance. We would deeply regret it if you were unable to join us in affirming our alliance."

McKay said, "Is it me, or did he just threaten us?"

"He did not say that it would adversely affect our alliance," Teyla began.

"But I could hear it," John answered.

"They are our allies," Teyla said.

"And we'd like to keep them that way for as long as possible," John said, and Ronon spread his hands in surrender.

John nodded. "All right, I suppose we could send a team - Radim and Lorne got along all right during the battle."

"I agree that it would be good to send Major Lorne," Teyla said. "And I'm sure that there are others who will wish to go. But, Colonel Sheppard, you are currently the leader of Atlantis. For you not to attend could be construed as an insult."

"The problem is, I'm the only leader right now," John said. "And you know how the IOA has been about leaving Atlantis without a commander on site."

"If they were that worried about it, they could hurry up and appoint someone else," McKay said.

"Oh, please," Zelenka said. "Do not wish for more trouble than we already have."

"Well, I for one would like to go along." Carson Beckett looked up from his tablet. "I'm curious about this genetic program they've developed. If they can field an entire crew for their warship, they may be further along than I'd thought."

"I don't see a problem with that," John said. Radim's sister Dahlia owed Beckett for saving her life: that was another useful obligation, and it couldn't hurt to remind Radim of it. Teyla was right, of course, he needed to go himself, but the question of who to leave in charge was a tricky one. The obvious person was, of course, Elizabeth Weir, whom they had rescued after she had been Ascended and then de-Ascended, but the IOA would never stand for it. McKay was out for much the same reason: the IOA still distrusted him after he had been captured by the Wraith and forcibly transformed into one of them. Zelenka was probably the next civilian authority, but that would make the Air Force uneasy; Lorne had to be part of the mission, and the next in rank, Major Casey, was brand new to Atlantis. A thought struck him, and he tapped his tablet, switching to his calendar. Yes, there it was: the General George Hammond was inbound from Earth, scheduled to arrive in just under 90 hours. Surely this mission wouldn't take more than twenty-four hours; he could ask the Hammond's commander, Colonel Carter, to stand in for him for that short a time. "When is this Foundation Day?"

Teyla consulted her own tablet. "A week from today."

"Right." John made a quick note. "You can tell Chief Ladon that we're delighted to attend. For now, it'll be Lorne and myself, and Dr Beckett, you're welcome to come along. Plus a Marine escort. And I'm open to suggestions if anyone else wants to attend." He looked around the table as he spoke, but no one volunteered. "All right. Looks like we're done here."

The briefing broke up quickly, McKay and Zelenka arguing about something as they left the room, Beckett with his head down over his tablet nearly tripping over a chair. John braced himself for an argument from Ronon, but the Satedan slipped out without a backward glance. Intead, it was Teyla who appeared at his side as John left the room, and he gave her a wary glance.

"Don't tell me you wanted to come along."

She shook her head. "The Genii do not particularly recognize women in authority, and I see no need to push the issue. Besides, I have made inquiries about the holiday, and it seems to be primarily a military affair."

"No, I would not invite him, either. There is no need to remind the Genii that we are also allied with Sateda."

"And that Sateda doesn't like them one little bit." John grinned in spite of himself, remembering a fight between the Genii elite company and the equally elite Satedan Band, which the Satedans had won handily. Teyla allowed herself a demure smile.

"Just so." Her smile faded. "And also - I would not like to remind them that they have common ground. Which is perhaps unscrupulous of me, but we need them as our allies, not allied against us and our bargain with the Wraith."

John gave her a sharp look. "You don't think Sateda would do that, do you?"

"I think it is unlikely at the moment," Teyla answered. "But it is not impossible."

They had reached the door of the mess hall, and John paused. "Coffee?"

They joined the line at the row of urns, filled their mugs, and found a table on the edge of a patch of sunlight, far enough away from anyone else that they were unlikely to be overheard. John stretched his feet into the sun, feeling the warmth through the leather of his boots. Teyla stirred her coffee, then set the spoon aside.

"I believe you are wise to attend the ceremony."

John slanted her a glance. "But?"

She smiled. "Must there be one?"

"You're worrying about who I'll leave in charge."

John leaned toward her, knowing his smile was probably smug, but unable to stop himself. "The Hammond arrives Sunday. I'm going to ask Sam to take over temporarily."

"Ah." Teyla blinked once, and her smile widened. "I believe that is what Rodney would call an elegant solution."

"Not bad, if I do say so myself." John sobered, lowering his voice. "Not that I don't think we'd be as well off with Elizabeth back in charge, but you know the IOA would have a fit."

"The IOA -" Teyla shook her head. "No, I will not say it. But it is foolish to waste Elizabeth's skills and training."

"No kidding. And as paranoid as everyone has been lately, I'm afraid to mention her name just in case they order me not to consult with her."

Teyla frowned. "Do you truly think they would do that?"

"I think they might," John answered. "And I'm not willing to risk it."

"It would be foolish," she agreed, "but I would not put such folly past them." She took a long swallow of her coffee. "So. You and Major Lorne and Doctor Beckett. That seems a reasonable group to attend the festival."

"Plus a Marine escort." John wasn't about to let anyone forget about them. "If anyone else wants to come along, I don't see why not - some of the people who fought on Avenger might want to go back. Or am I forgetting anybody?"

Teyla shook her head. "I cannot think of anyone else. It is only- I do not trust the Genii."

Teyla gave him a sidelong glance. "Ladon Radim is not so large a man. I expect you could throw him some distance."

"I-" John let out his breath in mock exasperation, very aware of the smile lurking in her eyes. "It's an expression. Don't worry, I'll be keeping an eye on him every minute."

"That would be wise," she said, and finished the last of her coffee.