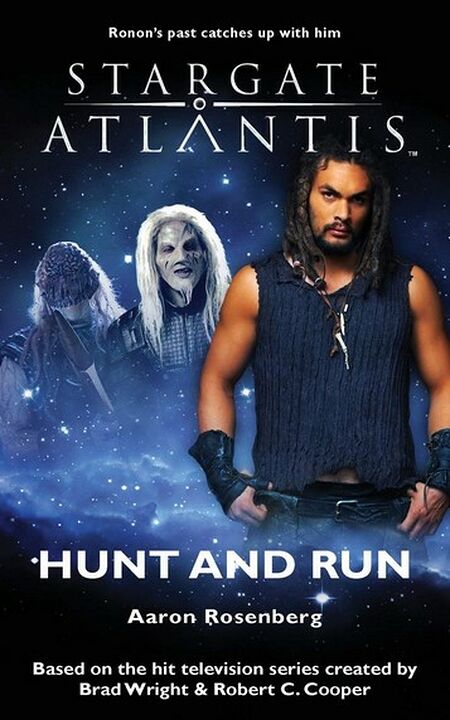 When the hunted become hunters...

Ronon Dex is a mystery. His past is a closed book and he likes it that way. But when the Atlantis team trigger a trap that leaves them stranded on a hostile world, only Ronon's past can save them - if it doesn't kill them first.

As the gripping tale unfolds, we return to Ronon's earliest days as a Runner and meet the charismatic leader who transformed him into a hunter of Wraith. But grief and rage can change the best of men and it soon becomes clear that those Ronon once considered brothers-in-arms are now on the hunt - and that the Atlantis team are their prey.

Unless Ronon can out hunt the hunters, Colonel Sheppard's team will fall victim to the vengeance of the V'rdai.

"You do?" That didn't exactly make Rodney feel better. "By reputation, or personally?"

Again the hesitation before Ronon answered. "Personally. And we have to watch our every step from here on out."

"Who is it?" Rodney wanted to know. Well, no, deep down he didn't want to know at all. But he needed to know.

The answer was one he hadn't expected. "Runners."

He felt the air move as Ronon shook his head. "No. Not like me. Not any more."

"Then like what? Who are they? How do you know them? What do they want?" Rodney was both horrified and fascinated. Before they'd met Ronon they'd never even heard of a Runner, but apparently the concept was legendary among all the worlds touched by the Wraith-a lone individual, caught by the Wraith but released and then hunted down. For sport. Most Runners didn't last very long, a week or two at most-they were said to be chosen for their cunning and their skills but the Wraith had been hunting and killing for centuries.

Ronon had been a Runner for seven years.

If these others were even half as good at hunting and fighting as he was, they had a serious problem on their hands.