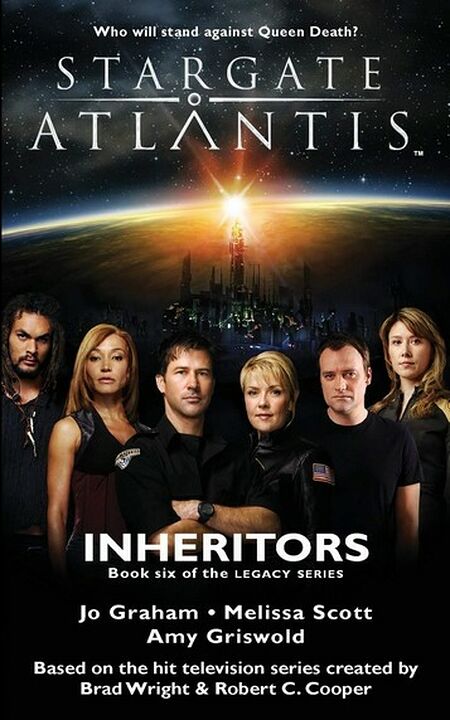 The battle lines are drawn. Queen Death is mustering her fleet. But who will stand against her?

As conflicts and betrayal threaten to shatter Atlantis's fragile alliances with Guide's Wraith and the Genii, humanity's only hope of survival rests on the fate of an Ancient device - a weapon too terrible to use but too powerful to cast aside. A weapon capable of exterminating every Wraith in the galaxy, and with them every human carrying Wraith DNA...

With Queen Death's fleet fast approaching, Colonel Sheppard and his team must make their final choice. In the sixth and concluding installment of the STARGATE ATLANTIS Legacy series, the future of Atlantis will be decided - and more than one of her crew will be called upon to sacrifice everything in the fight for her survival...

"Well, I'll need the device before I can destroy it," Sam said. "If you'll go get it from wherever you hid it..."

"You may as well come with me," John said, after a moment's hesitation that he decided wasn't entirely rational. "I'd rather not handle the weird Ancient device we don't understand any more than I have to. You don't have the ATA gene, so you're less likely to destroy all the Wraith in the galaxy by accident."

Sam followed him up a transport chamber and several sets of stairs to the catwalks where he usually went running with Ronon. Above them, a tangled grid of struts and roof supports extended up into the shadows.

"It's up there," John said. He scrambled up onto the rail of the catwalk, and then hauled himself up the jungle gym of struts and poles until he could reach the ledge where he'd stashed the weapon in between a spare Wraith stunner and a box of C4.

The stunner and the C4 were both still there, still securely duct taped to the ledge. In between them, the web of duct tape had been slit neatly with a knife.

"What?" Sam called from the catwalk below.

"The weapon's gone," John said. "Somebody got here first."