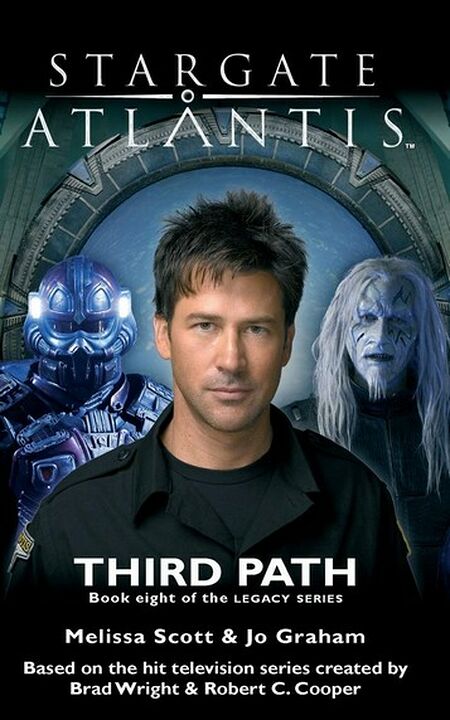 Elizabeth Weir and Ronon Dex are prisoners of the Vanir, whose damaged ship is plummeting into the mountains of Sateda. Meanwhile, Atlantis is in lock down, infected by a virulent contagion, cut off from the rest of the galaxy. And time is running out...

Helped by Dr. Daniel Jackson, Lt. Colonel Sheppard's team fight not only to save their city and free their friends, but ultimately to save an entire species from extinction. As tensions rise between the Wraith, the Travelers, and the Lanteans, old enemies - and long lost friends - must unite to walk a third path if the fragile peace in the Pegasus Galaxy is to hold.

In this riveting conclusion to the epic Legacy series, the destiny of Atlantis and her people will be decided.

Elizabeth leaned forward from the seat behind the pilot's, her arms crossed around her middle. "Same old Rodney."

"In some ways," Teyla said. Of course Elizabeth was not aware of the silent conversation. She knew nothing of Rodney's experiences with the Wraith, or of how they had left him with the residual Wraith telepathy that allowed him to speak privately with her.

"The date," Elizabeth said firmly. "What day is it?"

"According to the reckoning of your people, today is February 24, 2010," Teyla replied.

"Yes," Teyla said. "That was when we lost you to the Asurans. You truly do not remember anything since then?"

"Not until a few weeks ago," Elizabeth said. "When I was on Mazatla." Her frown deepened. "I have no idea what happened between."

"A great many things," Teyla said ruefully. There were so many things Elizabeth had missed. The war between the Wraith and the Asurans. Atlantis' return to Earth. The war against Queen Death. She did not even know that Torren existed. "I do not know where to begin."