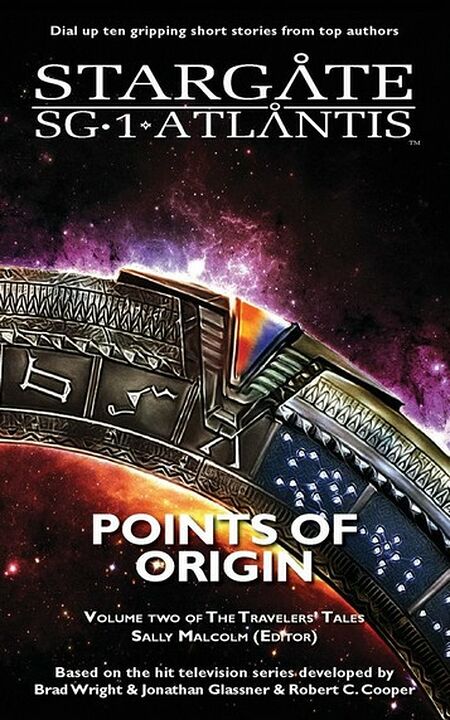 From Ronon's pre-culling days on Sateda to Colonel Carter's first weeks in command of Atlantis, from the fallout of George Hammond's encounter with SG-1 in 1969 to strange goings-on in Minnesota, Stargate: Points of Origins brings you another fantastic collection of stories from across the Pegasus and Milky Way galaxies. So come step through the gate with ten of our fantastic Stargate authors in our second anthology of Travelers' Tale...

The project was called Stairway to Heaven but it was a gate that went nowhere. George Hammond looked out the conference room window at the shape shrouded in drop cloths, dimly lit by a few hanging lights. The main power wasn't on. There wasn't any reason for it to be.

He put the briefing binders down on the scratched conference table and sat down thoughtfully in a rump-sprung chair. The whole installation was a little run down, a little out of date, just like him. He was less than a year from retirement, and this was the ideal job to conclude his career, winding down a project that had seemed like a good idea but had gone nowhere. It was a nice, quiet coda to thirty years of service, an end not with trumpets but with teeny, tiny violins.

General George Hammond snorted. He was feeling sorry for himself, and that was unworthy. He'd had a good run. He'd done a hell of a lot of interesting and useful things in his career, even if none of them had been historic. Thinking you're going to make history is a young man's dream. In real life, if you're lucky you do more good than harm and leave the place in better shape than you found it. He'd done some damn useful things, and that was more than you could say about this place.

He flipped open the blue binder again. A piece of alien technology discovered by an archaeological dig in Egypt that created a stable wormhole to another world. Impossible, unlikely, amazing, extraordinary - and ultimately a dead end. There was a house he'd visited once with his wife, on vacation sometime in the seventies, a folly of some kind, built with stairs that led up to ceilings and doors that opened onto walls. No reason for it. Just the kind of thing an owner with too much money thought was clever. The Stargate was the same thing, General West had told him when he handed over the metaphorical keys. It was a door that opened on a wall, stairs that led to the ceiling. A door that opened on a world rendered uninhabitable by a nuclear explosion, a gate to a destroyed gate. George was welcome to it.

He put the binder carefully on the table and went down the metal stairs to the control room, then around and out to the floor of the room that held the Stargate, the chamber that had once been a missile silo twenty-eight years earlier.

The drop cloths that shrouded the ring moved faintly in the breeze from the air conditioning, swaying slightly as though they concealed something other than the wall behind it. But of course there wasn't anything. It was just a concrete wall. And still he had to see.

"Take that thing off," he said, and the Airman ran to pull on the ropes that held the drop cloths.

They cascaded to the floor with a susurrating sound. It gleamed in the scant fluorescents, dark and quiet with the sheen of alien metal. A ring. A gate. A door with no key. George stood and looked at it for a long time.

Then he went in his office and sat down at the battered general issue desk. There was the promised pile of folders on his desk, and a copy of his orders. Clean up. Get everything in order. Make sure the thing is really useless. Arrange for its study just in case there's anything more to be read in its carvings. Pack it up and put it away.

Make sure the thing is really useless.

He called the lieutenant in, a boy who clearly wished he were somewhere much more exciting than underground in Colorado. "What's this pile of personnel folders for?"

"General West said there were some routine transfers, sir. He's taking Major Wright with him, so there needs to be a new research team head. Also Sgt. Devry is about to finish his enlistment and has declined to reenlist, so he needs to be replaced too. That's a couple of possible replacements for Devry, and someone who used to be with the research team who's asking to come back."

George spread the folders out. "That's all then, son."

A replacement for a sergeant. An ambitious young man who would need to be told he was barking up the wrong tree. A dead end, a door to the heavens draped in drop cloths, a promise unfulfilled.

Twenty five years and more had passed since he'd seen that face, but he had not forgotten it. The same wide blue eyes and pointed chin, the same cropped hair that should have been unattractive but wasn't, the same determined look straight at the camera without the slightest hint of a smile. Captain Samantha Carter.