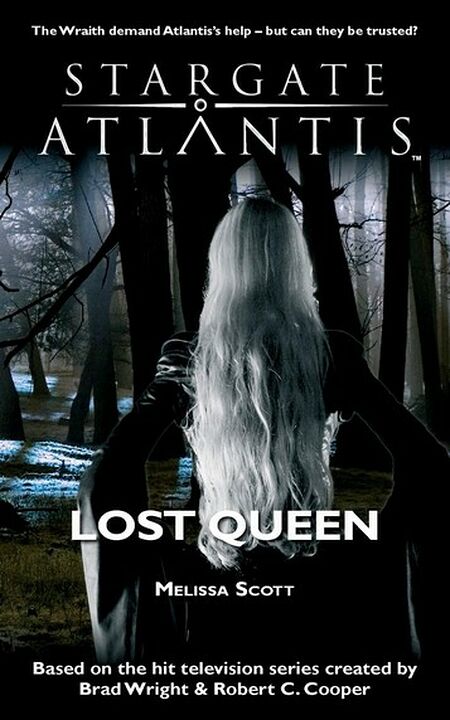 Told from the point of view of the Wraith, this novella sees the Atlantis team called upon to help find a missing Wraith queen, lost on a plague-ridden world.

This 40,000 word novella is set after the STARGATE ATLANTIS Legacy series.

The sun was hot, dazzling even after Everlasting's pupils had contracted to hairline slits, and he saw the distant movement before the shapes came clear. There were four Lanteans, one large male, two smaller males, and a slender female walking just behind one of the smaller males. Guide lifted his hand, signaling both greeting and for his group to stop, and Everlasting lifted his head, letting the breeze carry any trace chemicals past his sensor pits. He could taste humans, certainly, and not much more - none of the fear that usually flared when humans faced Wraith, though he could also taste a cold and underlying anger, like the tang of iron and blood. Forge felt it, too, and hissed softly.

The big one is dangerous...*

They are all dangerous,* Guide said. *And you would do well to remember it.* He stepped forward as the Lanteans came within earshot. "Sheppard! We are here as agreed."

The male in the lead nodded in answer, though he did not take his hands from the ugly Lantean weapon slung across his chest. Everlasting eyed it uneasily. He had never faced those weapons, though like all Wraith he had heard about them: a gunpowder weapon, but only vaguely like the ones used on Sateda and Hoff and among the Genii, one that spat bullets fast enough to overwhelm even a fully-fed Wraith's ability to heal. All four of them carried those weapons, and for the first time Everlasting felt a thread of fear worm its way down his spine. The Lanteans might be even more deadly than people had claimed.

"Guide. So these are the guys who lost their queen?"

Blaze bared teeth at that, and even Salt looked shocked. Everlasting wondered if the insult had been deliberate.

"They are." Guide extended his off hand, naming them one by one. "This is Blaze, Consort to Moonwhite who is missing. Everlasting, Consort of Light Breaking. Forge, Master of Sciences Biological to Light Breaking. And Salt - storymaker."

The one called Sheppard fixed Blaze with a hard stare. He was a tall man, with dark hair showing the first signs of gray at the temples: a senior blade, then. "Guide says you think your queen might be here."

Blaze said carefully, "As I am sure Guide has told you, our queen disappeared while traveling between our hive and her sister's, and we believe it is possible that she may have crash landed here. That is why we have asked permission to search."

"You sure you didn't take a quick look first?" That was the big man. He was darker than the others, and his hair hung in the same kind of heavy cords that were popular with the Wraith of Night's lineage. That similarity was vaguely disturbing, and Everlasting looked away.

"We are aware of the borders set out in the agreement," Blaze said, still speaking with great care. "And, though my queen has not formally assented to this treaty, it was still her wish that we honor it while we considered."

"Like that's believable," the big man said, not quite softly enough to ignore.

"Ronon." That was the female, stepping forward to take her place beside Sheppard. She was small and dark and sharp of feature, and Forge drew breath sharply.

That is the Young Queen. And the Consort. Which Guide did not see fit to mention.*

It is they indeed,* Guide answered, *and surely it's better to deal with them than with some underling.*

I would have liked to know that we had drawn their notice,* Blaze said.

The Young Queen went on as though they had not spoken - though of course, Everlasting thought, she could not hear their normal mode of communication.

"Though he has a point. Our allies here have said they saw Wraith ships in the night sky."

"Which might be a sign that my queen did come here," Blaze said, "and may be stranded anywhere on the planet."

"I'm willing to bet your cruiser already scanned for her," Sheppard said.

This time Blaze did show teeth. "Of course."

"We have no conclusive readings," Blaze answered.

"Oh, come on!" That was the third male, the one who had not yet spoken. "We know there have been Wraith here -"

"Well, we do." The one called McKay glared at both of them.

"We hadn't locked down all the details," Sheppard answered. "But, yeah, you might say we have proof that you people have been here."

The Young Queen took another step forward. "There has been an outbreak of blood fever in one of the perimeter villages. So far, it has spread to four more. We have sent medical aid, of course, but there have already been deaths, and are likely to be more."

"And we all know," Ronon said, "that the Wraith spread the blood fever."

In spite of himself, Everlasting took a half step backwards. Blood fever was one of the few diseases that had adapted to prey on the Wraith, and, while it was not invariably fatal, it was dangerous enough - and contagious enough - that most hives went out of their way to avoid it, even to the extent of abandoning an infected hunting ground for a generation or two.

"We are also vulnerable to it," Forge said. "And if you have come from an infected area, you endanger us all."

Even Guide looked concerned at that, and Ronon smiled. "That's got you worried -"

"Only a fool would not be," Forge snapped.

"Ronon," the Young Queen said again. She fixed Forge with a hard stare. "We have taken all precautions. You are safe - unlike the people of the surrounding villages who have already been exposed, and who do not have easy access to our medicines."

"And there's one more thing that doesn't make us very happy," Sheppard said. "We've got our doctors working on treatment, and they think this is an engineered disease."

But that's nonsense,* Forge protested. He shook his head, and spoke aloud. "That is - I grant you, it's not impossible, but it is highly unlikely. It is too dangerous to our own hives. No cleverman with half a brain would create a strain of that bacterium."

"Beckett thinks maybe you were trying to make it work just on humans," McKay said.

"Why would we believe you?" Ronon asked, and this time, the Young Queen did not correct him.

"This is hardly relevant to our problem," Blaze said, and fixed his stare on Sheppard. "If our queen is here, she is in grave danger. Let us search for her. If she isn't here, we'll search elsewhere."

"And if she is?" Sheppard's smile had no real amusement in it.

"We will recover her and leave," Blaze answered.

"McKay." Sheppard shook his head. "It seems like one hell of a coincidence that Teseirit gets hit with an outbreak of blood fever when you guys are sniffing around our borders."

"We have kept our part of the treaty," Everlasting said, controlling his anger with an effort. "Even though we were not part of it, nor were we consulted by those queens who signed it, we have honored their word to our own disadvantage. We require similar good faith from you if this treaty is to continue."

He felt the heat of Guide's annoyance wash over him, feeling without words, and saw Sheppard's hands tighten on his weapon. Ronon was smiling, the look of a blade ready and eager for combat, and the Young Queen was expressionless. Sheppard said, "Before we go any further, we'd like some assurance that these hives - Blaze and Everlasting - aren't actually responsible for our problems. That's assurance from you, Guide." Guide spread his hands, deliberately showing the hand-mouth. "And what would you consider sufficient assurances, Sheppard?"

"I want proof that this isn't a Wraith-engineered disease."

"We are here in good faith," Blaze said.

Forge looked at Guide. "How, Commander, are we supposed to answer this? What have you brought us into?"

"It is indeed," Guide answered, "and one I turn back on you, Sheppard. I know nothing of this, nor - I believe - do my allies. So how are we supposed to answer?"

"Well, I'd like the truth," Sheppard answered, "but I'll settle for something a bit more... plausible than this. Get Dr. Keller to certify what we've found."

That is the Fair One?* Salt asked, and Guide nodded.

"There is no time," Blaze said. "To bring her here - you put our queen's life even more at risk by the delay."

Everlasting bared teeth at that, but Forge spoke first. "If this is in fact accurate - if someone is trying to turn the blood fever into a weapon - we also need to know as much about it as possible. And it is also possible that your scientist has - misunderstood - the evidence. Or possibly it is something left over from the fight with Queen Death. We know her people made many regrettable choices. Let me examine the evidence."

"You've got to be kidding me," McKay said.

"It is indeed possible that this is engineered by the Wraith but not by these hives," the Young Queen said, with a glance at Sheppard. "If Forge is willing to consult with Dr. Beckett, perhaps that would be the quickest solution to our problem."

"If Forge does this, will you let us search?" Blaze asked.

Everlasting held his breath. That was the key, the one thing they needed. The Young Queen and Sheppard locked eyes a moment longer, and then Sheppard nodded. "Ok. But just him."

Are you willing?* Blaze looked over his shoulder, his own eagerness palpable.

I will go,* Forge answered, and one corner of his mouth curled up in a wry smile. *And trust you to come for me if there is treachery.*

I will promise that,* Everlasting said, his tone grim, and Forge dipped his head.

"I will go with you," he said aloud, and Sheppard nodded.