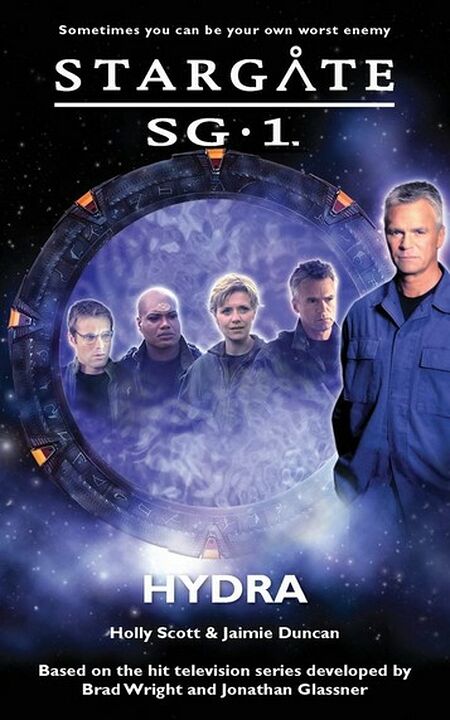 The faces of evil...

Rumours and accusations are reaching Stargate Command, and nothing is making sense. When SG-1 is met with fear and loathing on a peaceful world, and Master Bra'tac lays allegations of war crimes at their feet, they know they must investigate.

But the investigation leads the team into a deadly assault and it's only when a second Daniel Jackson stumbles through the Stargate, begging for help, that the truth begins to emerge. Because this Daniel Jackson is the product of a rogue N.I.D. operation that spans the reaches of the galaxy, and the tale he has to tell is truly shocking.

Facing a cunning and ruthless enemy, SG-1 must confront and triumph over their own capacity for cruelty and violence in order to save the S.G.C.-and themselves...

"Off-world activation," Hammond answered. "It's Bra'tac's IDC." No sooner had he explained than Bra'tac stepped through the wormhole, heavy boots clanging on the ramp. Teal'c stepped forward, ready to exchange traditional greetings, but Jack put a hand on his shoulder, a subtle command. Bra'tac's posture was stiff, and he barely glanced at either Jack or Teal'c. Beneath Jack's hand, Teal'c tensed.

No answering smile came from Bra'tac. Instead, he nodded to Hammond and said, "Hammond of Texas. I have come to ask for an explanation for your actions on the mountain world of the Eshet and to tell you the trust of the Jaffa has been broken."

Jack had never heard Bra'tac express mistrust of the Tau'ri since those very earliest days. The hair rose on the back of his neck. "Bra'tac, what the hell are you talking about?"

"I am speaking of the massacre which occurred on Eshet yesterday - the massacre led by your team in pursuit of technology owned by the people of that world."