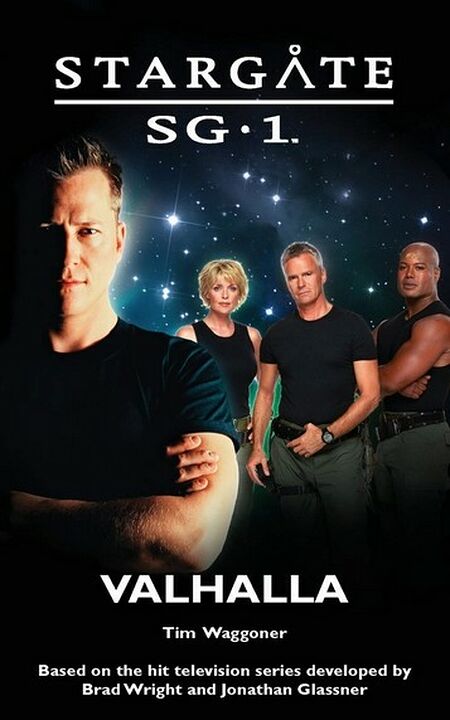 Upon the legendary fields of Valhalla, the spirits of Viking warriors do eternal battle in service to their god, Odin. By night they feast and toast the fallen, but at dawn the dead are restored to fight until the end of times.

When SG-1 find themselves trapped in this endless battle, prisoners of Odin, they must discover the strange truth about Valhalla before it is too late - and then confront the giant, Surtr, a terrible and immortal enemy bent on revenging himself against his god.

In order to defeat Surtr, Carter suggests using a naquadrium power cell Jonas Quinn has developed on his home world, but when she and Colonel O'Neill arrive on Langara they realize their problems have only just begun...

"So we're talking what?" O'Neill said. "A boatload of Vikings who got really lost on their way to pillage Britain?"

"Not exactly," Daniel said. "As I said, the artifacts contain Norse runes - on the outside. But on the inside of one of the artifacts - specifically, this scabbard - I discovered writing from another language: Asgard."

Teal'c frowned. "On the inside, Daniel Jackson?"

Daniel leaned back, looking suddenly sheepish. "Yeah, well, when I was examining the scabbard I, uh, sort of dropped it."

"And let me guess," O'Neill said. "It sort of broke. Didn't they teach you not to drop priceless ancient artifacts back in Archaeology 101?"

Daniel pursed his lips in irritation, but he took hold of the scabbard and lifted one side of it away from the other. He held up the split piece and turned the inside toward the others so they could see the runes etched within. "On the inside, written in Asgard, is a gate address - one previously unknown to us. The address is accompanied by a single word: Valhalla."