Hall of the Two Truths 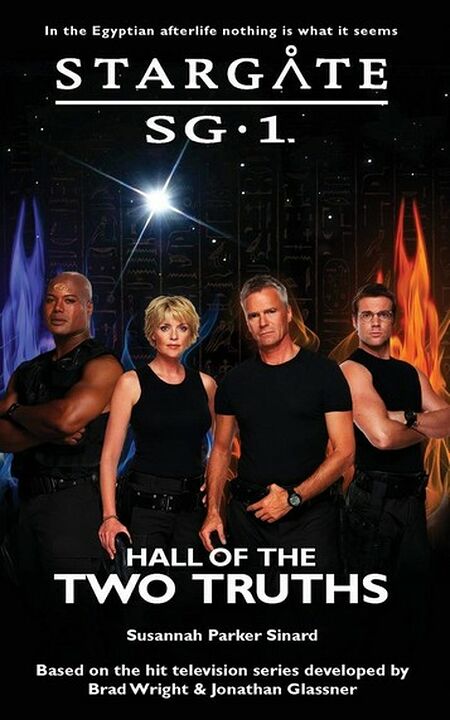 After suffering a brutal attack off-world, each member of SG-1 finds themselves stranded alone in the Ancient Egyptian afterlife - and on a journey through the Book of the Dead.

With reality shifting around them, Colonel O'Neill, Dr. Daniel Jackson, Major Carter and Teal'c must each navigate a treacherous path toward final judgment in the Hall of the Two Truths. On the way, they will be tested to their mental and physical limits by their past mistakes, their greatest fears and their deepest desires...

In this classic SG-1 adventure, the team must dig deep to survive. Their only hope of escape lies in finding each other, but in this place where nothing and no one is what it seems, who do they trust and what do they dare to believe?

Teal'c ignored him and Jack could see the crackle of energy at the tip of his weapon as he took aim.

The first death glider strafed the ground around them, kicking up jagged bits of stone and dirt. A large chunk of shrapnel hit the rock just by Jack's head and he ducked reflexively. Coughing, he swung out from behind the boulder and took aim at the second glider coming in from behind the first one. Jack could hear the pings of his bullets ricocheting off the ship's hull as it zoomed overhead.

From the pitch of the sound, Jack knew they were circling around for another attack. He'd heard the sharp staccato sound of Carter's P90 as she fired too, but her weapon was as worthless as his against such an attack. Only Teal'c had any chance of bringing down the ships.

Jack assessed their options. They were sitting ducks out in the open like this, but if they all made a break for the tree line they'd never make it before the death gliders swung around again.