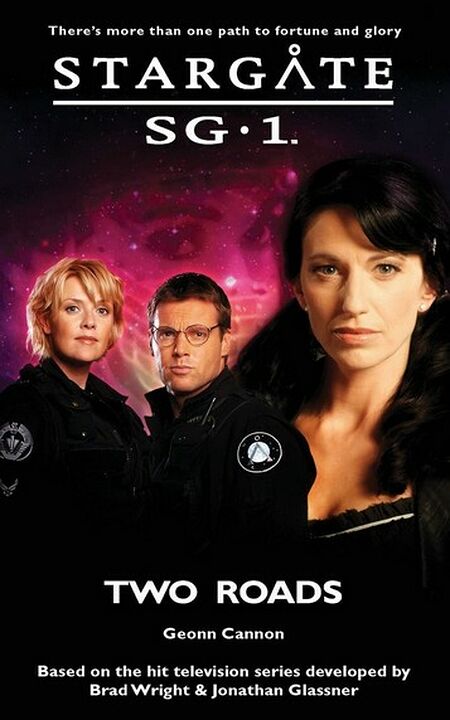 The Goa'uld have been defeated, the Jaffa are free and, in the power vacuum left behind, the dark underbelly of the galaxy is fighting over the spoils.

Among these thieves and rogues is Vala Mal Doran, on the trail of the fabulous treasure left behind by the System Lord Kali. But Vala is not the only one seeking the hoard. Back at Stargate Command, Dr. Daniel Jackson has made a horrifying discovery - a doomsday device designed to exterminate the Jaffa who have dared to defy their gods.

Kali's treasure might provide SG-1 with the means to disarm the device, but only if they can steal it back from one of the galaxy's most ruthless criminals. Of course, it's entirely possible that Vala Mal Doran will get there first...

The work table in the middle of Daniel Jackson's lab was nearly invisible under the boxes and crates he'd placed there. He had a system, the fine points of which currently eluded him as he turned and searched for the crate of scrolls brought back from PX8-275. He spotted it under another box and put his pencil in his mouth and bit down on it to free his hands. As he excavated the box he wanted there was a knock on the open door of his office followed by a slow, quizzical, "Hello-oo..."

"Jack." The pencil fell from his mouth. "Want to give me a hand here?"

Jack O'Neill entered the room, saw what Daniel was doing, and took the box from him. He looked for a flat surface on which to place it, gave up, and bent down to put it on the floor at Daniel's feet. "There you go."

"Thanks," Daniel muttered. He took out one of the scrolls and skimmed it to make sure it had the information he needed before he took it to the worktable. "Did you need me for something?"

"No," Jack said, hands in his pockets as he looked over the clutter. They'd recently discovered that something he touched in Daniel's lab had telepathically connected him to a barber from Indiana. Since then he'd tried very hard not to touch anything he didn't recognize. "It's been eighteen hours since anyone on the base has seen you. I just wanted to make sure you hadn't gone all... glowfish on us again."

Daniel chuckled. "I don't have any plans to do that again, thank you."

"Yes, well. That's what you said last time. I figured if you were still among the non-Ascended beings, you might want to stick your head out for a little food. Cafeteria is serving... something. They claim it's meat. I'm not so sure."

"Man cannot live by dust alone. You need to eat something."

Daniel sighed. "For the first time in, well, the history of the SGC, we actually have a little downtime. No imminent dangers on our doorstep, no Goa'uld running around threatening us, no missions on the docket. Teal'c is off with the Free Jaffa, Sam is in California, and I finally have the free time to go through the past eight years' worth of artifacts we've brought back with us through the gate. This is what I do for fun, Jack. It relaxes me."

"If you say so." Jack had already forgotten his ban on touching things and picked up an owl carved out of stone. "You ever thought about opening a booth in a craft mall? You could probably make a killing with some of this stuff."

Daniel snatched the figure away and returned it to the proper position in his chaotic system. "I appreciate what you're trying to do, honestly, but I'm fine. Clean bill of health, completely and totally descended in proper working order. I have a library of journals collecting dust in here with information I've collected on dozens upon dozens of worlds that I haven't had the time to go over properly." He rested his hand on top of a crate. "I'm not gun-shy, Jack. I'm not feeling anxious about yet another near-death experience. Frankly, I'm kind of used to them by now."

"You can see why someone might think otherwise. Locking yourself up down here..."

"This is relaxing to me! This, this, this..." He gestured at the room like a game show model. "This is... my lake in Minnesota with no fish in it. I'm an archaeologist. I study history, and for the past decade, I've had more history and more relics than I knew what to do with because somewhere along the line I had to become a soldier first and an explorer second. Do you want to know why no one's seen me in eighteen hours? I'm not hiding... I'm basking."

Jack didn't seem convinced, but he held his hands up in surrender. "All right, well... if you want to add a few more relics to your pile, SG-9 is scheduled to go off-world tomorrow. They have their own version of you, and according to what she saw on the MALP, it looks like the Stargate is located inside a temple dedicated to worshipping Kali. All our reports say she was one of the System Lords who backed Anubis' play in exchange for staying on his good side when he was establishing his new Goa'uld order. Depending on how friendly they really were..."

"You're hoping he might have given her some lovely Ancient parting gifts in exchange for her loyalty. A ZPM, perhaps?"

"A man can dream," Jack said. "Anyway, the place is just sitting there gathering dust. SG-9 is confident that Kali skipped town after we wiped the floor with her buddy, so it should just be a walk in the park. And even if there aren't loads of goodies to dig through, there should be a lot of modern-day things scattered around if you want something to compare the old junk with."

Daniel perked up. "Wow. Yes, that would actually be incredibly helpful. Thank you."

"No problem. Just promise me you won't die on this one, huh? Every time you leave we have to sell your place, and then you get a new one when you come back, and I'm getting tired of updating my address book all the time."

Jack nodded and started to back out of the room. "I wasn't kidding about that lunch, by the way. Genuine alleged government meat products. Mm-mm, good eating."

Daniel looked at the pile of work in front of him with the unsettling knowledge it was about to be made larger by whatever he found with SG-9. He put down his journal and said, "Yeah. I suppose I could eat, now that you mention it." He followed Jack out of the room and hoped there was an alternative to whatever purported meat product Jack was talking about.

Jack was waiting at the base of the ramp, arms folded casually over his chest, when SG-9 returned. They had radioed ahead to inform him of their findings, and his eyes locked onto Daniel as the Stargate disengaged. Jack raised his eyebrows at Colonel Getty. "I thought I told you not to let him touch anything.

"My apologies, sir. I turned my back for one minute, suddenly it's the end of the world."

"I won't judge you too harshly. I've been on the receiving end of that myself."

Jack glared at Daniel. "First mission after defeating the Goa'uld."

"A nice leisurely temple to explore, nothing to get excited about except a few dusty carvings."

Jack thumped the back of his hand against Daniel's chest.

"First time leaving your office in weeks and you go and find a doomsday weapon."