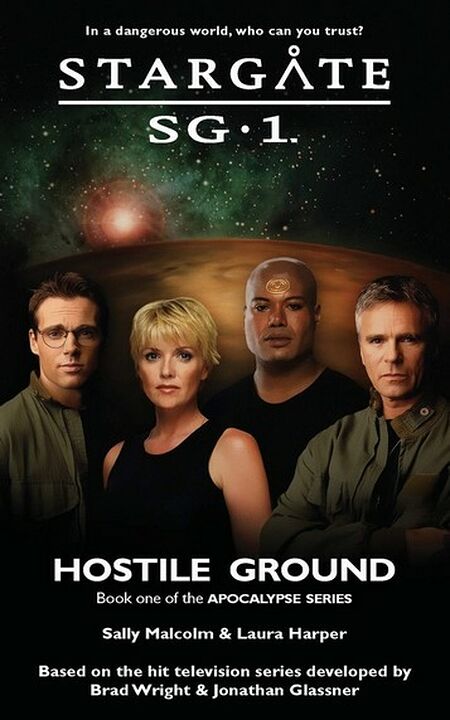 It was meant to be an easy mission, a walk in the park. But SG-1's first trip off-world after Colonel O'Neill's return from Edora (STARGATE SG-1: One Hundred Days) proves to be anything but easy.

Tapped for a covert assignment, O'Neill must conceal the truth from his team at all costs. So when Dr Daniel Jackson is injured and the mission begins to go awry, tensions quickly reach breaking point. Stranded on a hostile planet, and desperate to find a way home before it's too late, O'Neill leads his fractured team on a desperate journey across a barren and forsaken world.

Faced with an enemy more vicious than anything they've encountered before, only SG-1's strength as a unit will keep them alive - if the secret O'Neill is hiding doesn't tear them apart first...

The colonel's words were clipped, each one bitten off like a curse as he knelt next to Daniel in the mud. Sam couldn't see what he was doing, didn't dare take her eyes off the rain-sodden tree line, but she could smell the antiseptic and heard Daniel hiss in a sharp breath.

"We are now less than a kilometer from the Stargate," Teal'c said. He crouched next to her, staff weapon raised and his arm brushing against hers, making the most of the scant cover they shared - a fallen tree, rotting in the incessant rain. It wouldn't do much against a staff blast but it was better than nothing. She glanced up at the heavy sky, the clouds hiding a multitude of dangers. If those gliders came back...

Breathing hard, breathing through pain, Daniel said, "I'm okay. I can make it."

"Damn right you can." The colonel's growl made it an order as he ripped open another field dressing. Sam heard Daniel's shout of pain as the colonel pressed the bandage onto the wound. She didn't know how badly he was injured, but it had to be serious for the colonel to risk stopping their breakneck flight to the Stargate. Movement - a fleeting shadow back in the tree line. She wiped rain from her face and eyes, squinting through the curtain of water that slanted across the open ground between SG-1 and the edge of the forest. Yes, there it was again, a glint of gold amid the trees. "Sir," she said, finger itchy on the trigger, "you might want to hurry that up."

"What do you think I'm doing, Carter?"

She ignored his sharp tone. "Teal'c, do you see them? Two-o'clock."

"I do." He shifted his position, taking aim.

"Sir?" she risked a glance over her shoulder. Daniel was ashen, his jacket torn and dark with blood where the staff blast had hit, just above the hip and below his tac vest. She glimpsed a white compression bandage through the torn fabric. He grimaced as he moved, trying to stand.

The colonel put a restraining hand on his shoulder and looked over at Sam. She knew that look, the flat uncompromising expression that shut everything down. It meant they were in trouble. "Daniel and I are gonna head for the gate," he said, starting to pack away the med-kit with quick, efficient movements. "You and Teal'c hold them here as long as you can, then come after us." He stuffed his gear back into his vest and tugged the bill of his cap lower. "Don't leave it too long, Major."

She understood. If they were too slow getting back to the gate, there was a real danger they'd be outflanked. "Yes sir. Good luck."

His only reply was a curt nod before he turned to Daniel. "Ready?"

"Sure," Daniel said, teeth gritted. "How hard can it be?"

"Attaboy," the colonel said as he helped Daniel to his feet. "We might have to run."

Daniel nodded, turning from ashen to milky, but determined as ever. "Let's go."

Sam looked away, back to the enemy hiding in the trees, but not before she'd seen the bloom of scarlet on Daniel's dressing. She swallowed a hard knot of anxiety. It would be difficult enough to make it to the gate carrying a wound like that, let alone with a platoon of Jaffa on their heels.

"The enemy is moving," Teal'c murmured as several Jaffa emerged from the trees, keeping low as they scanned the scrubby clearing. Sam ducked behind their cover, not wanting to give away their position. "Go now, O'Neill," Teal'c said softly. "We will cover your retreat and hold this position as long as possible."

"Counting on it," the colonel said.

With Daniel's arm looped over his shoulder, he headed out into the sparse woodland that ran all the way back to the Stargate. Sam winced at their slow, awkward pace. At that rate, they'd never reach the gate before the Jaffa.

A squall of rain blew into her face and she had to turn away, squeezing her eyes shut. When she looked back, Daniel and the colonel were gone, the rain at least helping to hide them from the advancing Jaffa, even if it did make the muddy ground slick and treacherous under foot. Wiping her face on her sleeve, she squirmed around and shivered as a trickle of rain slid down her neck and under her collar. "Daniel's moving pretty slow," she whispered, taking a bead on one of the Jaffa and switching her weapon to single shot. "Do you think they'll make it in time?" Even through the rain, she knew she'd hit her target. But not yet, let them come out a little further from the cover of the trees.

"It is possible," Teal'c said, "that one of us will need to precede them to the Stargate and hold it against the Jaffa."

"Yeah," Sam said, a beat of fear kicking in her chest, "that's what I figured."