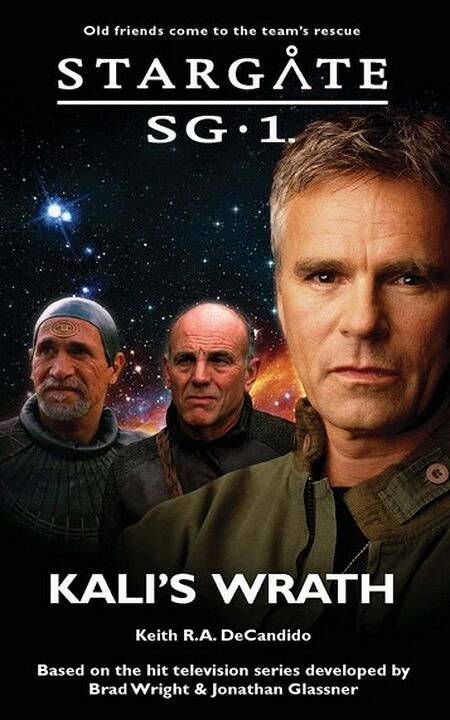 When the only surviving member of SG-7 brings Kali's injured First Prime back to Stargate Command, Colonel O'Neill and his team are called on to investigate an attack by the Reetou on one of Kali's homeworlds.

But when a sabotaged Stargate leaves O'Neill, Carter and Daniel trapped off-world, Teal'c must team up with Kali's First Prime, Jacob Carter, and Bra'tac to rescue his missing team. Meanwhile, the rest of SG-1 is presented with an offer they can't refuse - to help Kali negotiate peace with the Reetou, or see thousands of her people massacred as punishment for their refusal.

As time ticks down to the fateful meeting between Kali and the Reetou, SG-1 must escape before they fall victim to the Reetou's deadly subterfuge...

Colonel Jack O'Neill heard the alert over the SGC's speakers as he exited the men's room. It was rarely a good thing when Master Sergeant Walter Harriman spoke those words. Still, there was always a chance this would be one of those rare good things. Or at least a not-actively-bad thing.

Or maybe it'd be some snake-head trying to kill them, or a rebel Jaffa or a Tok'ra showing up with bad news...

Either way, it was an excuse for O'Neill to put off doing the paperwork on the whole Imhotep disaster. He hated writing mission reports. For starters, Carter, Daniel, and Teal'c were all so much better at it. Carter and Daniel always included way more detail than O'Neill, and Teal'c's reports were downright meticulous.

O'Neill entered the control room to see that General Hammond was already there, standing over Harriman. Peering through the window, O'Neill saw that Captain Engenbe's platoon of Marines was surrounding the ramp. The iris was closed, but O'Neill could see the glow of the active gate behind it.

The sergeant looked up at Hammond. "Receiving SG-7's IDC, sir."

"Open the iris," Hammond said quickly. "They only embarked half an hour ago." The general looked over at O'Neill. "You feeling all right, Colonel?"

"Hm? Oh, no, just a little upset stomach. It was cheesesteak day in the mess."

The iris cycled open, and a few seconds later Captain Patel came through, dragging a large man onto the ramp. "Need a medical team, stat!" she was shouting as she dropped the man with a resounding metallic thud. The captain's hands and arms were covered in blood.

"I can see that, Colonel." Hammond leaned forward and spoke into the microphone. "Medical team, report to the gate room. Captain Engenbe, remain as you are."

Patel turned and shot a look up at Hammond. "General, I know this man is a Jaffa, but he was wounded saving my life. And he and I are the only ones who survived the Reetou attack."

"Reetou?" O'Neill tensed. They hadn't heard much from those overgrown invisible insects since stopping the team that tried to destroy the SGC, but there'd been reports from the Tok'ra of other attacks on Goa'uld worlds.

Engenbe said, "Yes sir," and then nodded to one of the other Marines in the gate room, who immediately whipped out one of the three T.E.R.s they had at the SGC, which Hammond had made standard equipment for whichever team was in charge of gate room security.

After aiming the T.E.R. all over the room, the Marine turned to Engenbe and said, "Clear, sir."

"Stand down, Captain Engenbe." As the Marines lowered their weapons, Hammond softened his tone. "Captain Patel, I'm sorry about your team. Report to the infirmary. We'll debrief after Dr. Fraiser clears you."

One of the side doors slid open to reveal Fraiser and four other medical staff, two of whom were wheeling a gurney. The diminutive doctor pushed past the Marines to look over the Jaffa.

Hammond looked at O'Neill. "Gather the rest of your team, Colonel. Once we've debriefed Captain Patel, I may need SG-1 to follow through."

O'Neill went to the phone to call Carter and Daniel, who were doing whatever nerd things they did on their downtime, Carter in her lab surrounded by computers, Daniel in his office surrounded by crumbling pieces of paper. Teal'c he'd have to handle in person, as he was in the midst of kelnorim.

After calling the major and Daniel, he wandered through the corridors deep below Cheyenne Mountain toward Teal'c's quarters. He didn't know Patel or the other two subordinate members of SG-7 very well, but he and Lagdamen went back a few years. They'd bumped into each other here and there over their years in the service, and when Lagdamen was assigned to the SGC, they'd bonded over their mutual love of The Simpsons.

The memorial service for the members of SG-17, all killed when Zipacna destroyed the Tok'ra base on Revanna, wasn't that long ago, and O'Neill was not at all happy that he was going to have to attend another funeral for lost comrades. For that matter, they'd lost a lot of really good people here on the base the last time they'd tussled with the Reetou three years ago.

Since the colonel got Teal'c back from the depths of kelnorim-and somehow managed not to knock over any of the dozens of candles the Jaffa had all over the place-the pair of them joined Carter, Daniel, Hammond, Fraiser, and Patel in the briefing room adjacent to Hammond's office.

The first thing O'Neill did was go to Patel. She had changed out of the fleece jacket and winter uniform and was now wearing the blue BDUs that were standard base-wear for SGC personnel. O'Neill also saw that she looked more than a little shell-shocked. "How you doin', Captain?"

Sitting across from her, Daniel said, "I'm sorry about your team. Sergeant Castro was an amazing linguist."

Once they were all seated, Patel told the general, the doctor, and SG-1 exactly what happened on P3X-418.

Daniel frowned. "You said the First Prime's name was Thakka?"

"Why do you ask, Dr. Jackson?" Hammond prompted.

"Well, when I was infiltrating the Goa'uld summit, Kali mentioned that her First Prime was killed by Anubis' Jaffa. Later, I overheard her and Bastet talking, and she referred to her First Prime as 'the Thakka.' And, actually, that kind of makes sense as a title rather than a name. See, here on Earth, there was a guild of assassins and criminals who served Kali known as the Thuggees. In fact, that's where the word thug comes from."

"Really?" That actually surprised and impressed O'Neill, though he spoke his reply with his usual feigned disinterest. When either Daniel or Carter went off on an intellectual rant, O'Neill found it was better to always react with annoyance, regardless of whether or not he was actually annoyed, as showing that he thought any of it was cool would just encourage them to babble even more, and then nothing would ever get done.

"Yes, and another word for them is thakka. It's not a big stretch to go from what the Thuggees did here and what the Jaffa do for the Goa'uld. It's possible that Thakka is the title she gives to her First Prime."

Now O'Neill's disinterest was not at all feigned. "Fascinating," he deadpanned. Then he turned to Patel. "With all due respect to what you went through out there, Captain, I gotta ask-what the hell were you thinking?"

"Why did you bring this Thakka back here?"

Patel folded her hands together on the briefing table. "Sir, if it wasn't for Thakka, I'd be dead right now with the rest of my team-and none of you would even be aware that anything was wrong for another five-and-a-half hours when we missed our check-in."

"Yeah, but he's the First Prime for a Goa'uld."

Raising her eyebrows, Patel said, "So was Teal'c when you brought him back through the gate."

O'Neill blinked. "That was different. He saved our li-" He cut himself off. "Walked right into that one."

Thankfully, Hammond turned to Fraiser before O'Neill's foot got any further down his throat. "Doctor, how is this Thakka?"

Fraiser sighed bitterly. "Luckily for him, we have a very comprehensive notion of what Reetou weapons do to a human body."

O'Neill winced, reminded again of the personnel who were killed when the Reetou invaded. Fraiser had been able to examine their bodies, giving her useful intel on how the weapons worked, but it was overall a really lousy way to get that information.