Female of the Species 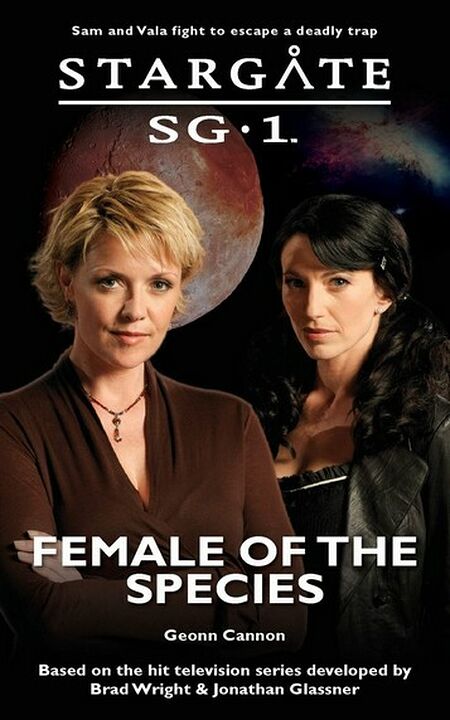 Vala Mal Doran, SG-1's newest recruit, simply can't ignore the plea for help she receives from her old friend, Tanis Reynard. And with vital intel up for grabs, Vala ensures SG-1 can't ignore it either...

However, as the mission quickly unravels, Colonel Carter and Vala find themselves bound for the 'inescapable' prison world Viaxeiro Caldera, leaving Colonel Mitchell, Teal'c, and Dr. Daniel Jackson to mount a rescue. Meanwhile, Sam and Vala uncover a sinister secret on Viaxeiro which means they will have to overcome their personal rivalries and learn to work together to bring down the insidious faction which controls the prison world - preferably before their true identities are discovered.

By the time Mitchell and the rest of SG-1 reach Viaxeiro, it's anyone's guess who's rescuing whom in this rip-roaring Stargate adventure.

"Yo, Jackson. Siler is offering lunch. Beer, wings, the whole nine yards, on him. Apparently it's been a week since he's been hurt, and he thought that required a celebration. You in?"

"Uh, maybe. Did he say where they're going? I'm still not really welcome in O'Malley's."

He closed his eyes and pressed his fingers to his temple. "On second thought, it sounds like we're about to get busy."

Mitchell stepped aside as Vala appeared, arriving at such speed that she had to slam into the door just to slow herself down enough to get into the office. She wobbled on her feet a little and shook her head as she stumbled over to where Daniel was sitting.

"Daniel. Ow. I need your help. I need you to convince General Landry to send SG-1 on a mission. It's a matter of life and death."

"It's a rescue mission. A mission of mercy! SG-1 does those all the time, right?" She looked behind her and finally noticed Mitchell. "Oh. Hello, Colonel Mitchell. You can help convince him, too. The two of you, how could he say no?"

Mitchell enunciated when he asked, "What... mission?"

"Calm down and use your words," Daniel said.

Vala sneered at him. "Don't you patronize me! This is a serious matter. My friend Tanis Reynard needs my help. She sent a distress signal. She's been arrested and she's being held in a horrible prison where there's no hope of escape. We have to go break her out."

Mitchell said, "Tanis Reynard, the Hebridian prisoner who killed her guards when their ship crashed on an uninhabited world? SG-1 ran into her four years ago. She and her cronies tied up Carter off-world and tried to use the SGC computers to find new planets to pillage."

"Well." Vala flipped her hair out of her face and rubbed her arm where she'd run into the door. "We all have pasts we're not proud of..." She looked at Daniel. "So you've met Tanis?"

"No, I haven't had the pleasure." Daniel gathered his notebooks and stood up. "I was, ah, somewhere else that year. So, Cam, you mentioned beer and wings?"