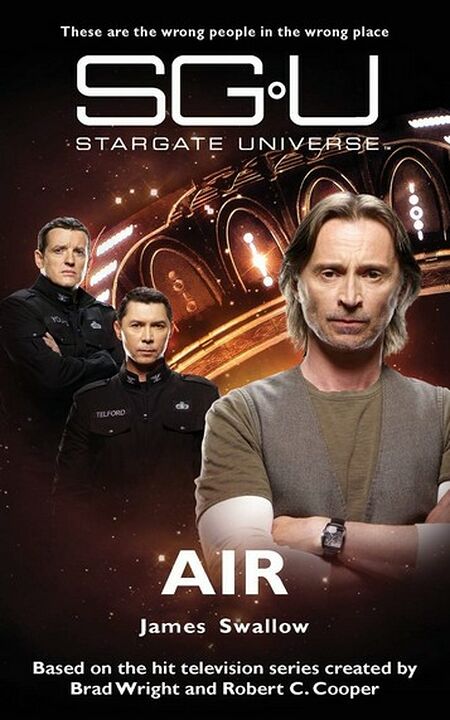 Without food, supplies, or a way home, Colonel Everett Young finds himself in charge of a mission that has gone wrong before it has even begun. Stranded and alone on the far side of the universe, the mismatched team of scientists, technicians, and military personnel have only one objective: staying alive.

As personalities clash and desperation takes hold, salvation lies in the hands of Dr. Nicholas Rush, the man responsible for their plight, a man with an agenda of his own -

"Stargate Universe" is the gritty new spin-off of the hit TV shows "Stargate SG-1" and "Stargate: Atlantis". Working from the original screenplay, award-winning author James Swallow has combined the three pilot episodes into this thrilling full-length novel which includes deleted scenes and dialog, making it a must-read for all Stargate fans.

Scott took a step and a sullen rumble echoed through the decks. He had the sudden sense of the whole ship tensing around them, like an animal coiling its muscles before pouncing; then a second tremor resonated through, and Scott felt a brief sensation of motion and velocity that faded a heartbeat later.

"What the hell was that?" said Greer.

"I don't know." Scott hesitated, then snapped out an order to the Marine. "Sergeant, get these people settled down. Start making an inventory of everything we brought through as soon as you can. Try to figure out who and what we have. No one leaves this room." He shot a look at Wallace and, as an afterthought, thrust the MagLite into his hand. "Eli! You help him!"

The guy took the flashlight and panned it around, and his face changed as he got the first good look at the place they were in. Eli's mouth dropped open.

It was then, just by chance, that Scott noticed for the first time the writing on the T-shirt Eli was wearing beneath his hoodie. It was white text on a red background, some kind of nerd joke, just three words: YOU ARE HERE.

Yeah, he thought as he walked away, wherever the hell that is.