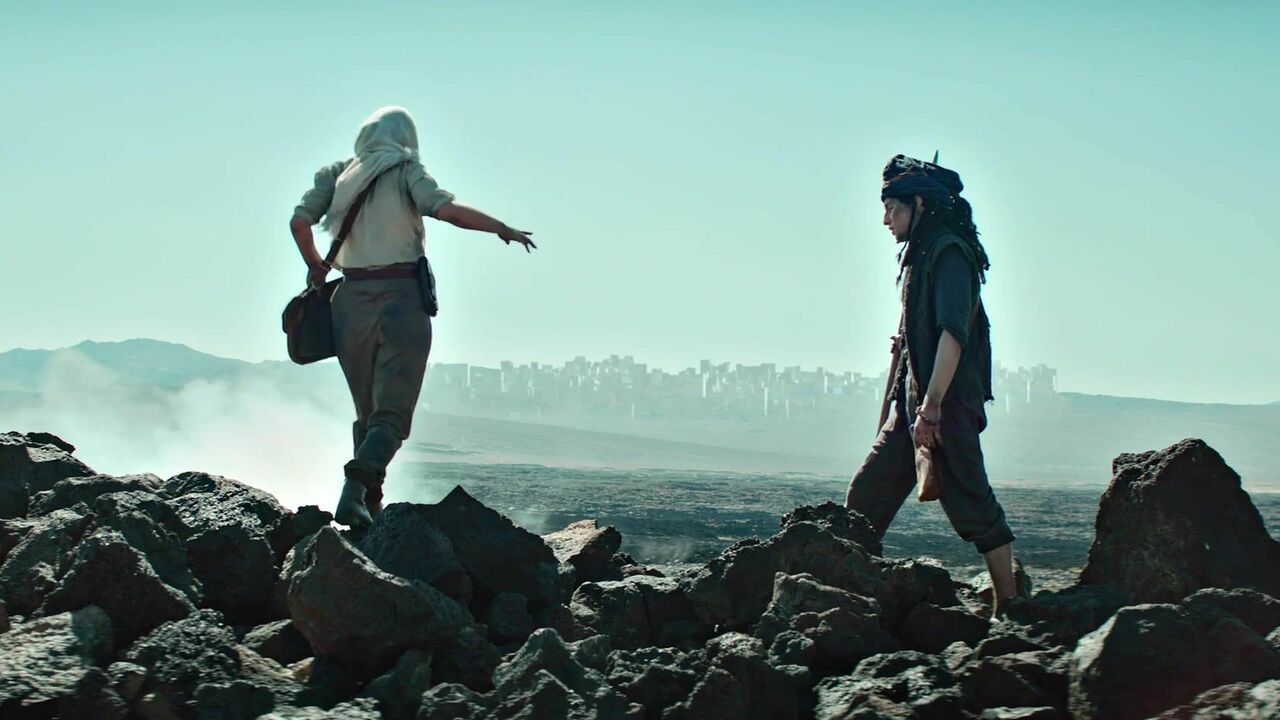 JAMES So, we'll go in, in two teams. One creates a diversion, while the other rescues the professor.

WASIF Then we stay here for the rest of our lives.

[she points to the symbols on the notebook].

CATHERINE Have you seen these symbols?

CATHERINE It's just us.

[Kasuf looks at the symbols in the notebook]

CATHERINE Kasuf. Are these symbols int he cave?

KASUF Yes, in the cave.

CATHERINE The cave... where?

BRUCKE You will be filming this way? The scenery must not outshine me.

EVA How could it?

[Aset is on her throne, she holds Catherine's hair clip in her hands. Brucke opens a case filled with naquadah]

BRUCKE This here is the best angle for the Naquadah.

ASET Which would your master prefer? Should those who followed you here... toil in my mines? Or should we kill them?

[Aset holds up the hair clip. Langford grabs it and hides it before Brucke sees it]

BRUCKE What is she saying?

LANGFORD I believe that she is excited to be in your film.

BRUCKE As well as she should be. Don't tell her that. Tell her anything else. Ready?

LANGFORD The other humans... killing them won't be necessary. We prefer to fight our own battles.

JAMES Wasif and I will return to camp, enlist more villagers to scout the temple and see if we can find a better point of entry. We could go with you.

CATHERINE  I've been in caves before, James, crossed deserts too.

JAMES  Just make it back safely. And I promise to stop being so nervous.

CATHERINE  If you say so.

WASIF Yes, yes, yes. She knows. Do not be a hero, Catherine.

[the two groups separate and start walking in the desert].

[Langford closes the box. He is exhausted from carrying it to the gate. He looks out the window]

LANGFORD Catherine. Where are you?

[Catherine points to a city]

CATHERINE Are we... going there?

KASUF Na-nay. That's the city of Nagada. Many people. I cannot take you there. Our secret cave lies hidden beneath the city.

KASUF My word is rich with Naquadah. It our privilege to mine it for the Gods. Naquadah flows in the blood of my people. And we are strong. But only our Gods harness its true power to crack thunder in the stars to live among the heavens.

CATHERINE Kasuf? Where I travel from, Gods no walk with people.

KASUF I'm sorry? I believe your Gods still love you.

CATHERINE What if the love you believe in from Ra or Aset. What if they faking the love all along?

KASUF The love of a God cannot be faked.

CATHERINE But they tricked you into being their uh... slaves.

CATHERINE Don't want be to be free?

KASUF Free? I am. I am free, Catherine. I believe you Gods walk with you even if you cannot see them.

CATHERINE Kasuf, your power comes from within and is strong among your people. Ra or Aset can own. Never mind, Kasuf. We have to keep going.

WASIF These stones they mine,  allow Ra absolute power in the stars. And all who stand against him, are punished in white fire. What will happen when we get home?

WASIF  No, the portal. It's far too dangerous for our uncertain world.

JAMES If it were up to me, nobody would ever go through the blasted thing again.

WASIF But it won't be up to you. And they won't keep quiet.

JAMES Why does he keep taking your hand?

JAMES Nobody's ever tried to take my hand. Right. We best be going.

[Wasif and Motawk look at each other and smile shyly]

[They enter the cave. Kasuf shows Catherine the stone stele where he saw the symbols in the notebook]

CATHERINE I've seen these before. Kasuf, I could kiss you. The completed sequence.

CATHERINE Yeah, this is what I needed.

[Catherine gives him the torch to retrieve his notebook from his bag. Kasuf finds the flashlight and plays with it. Catherine tells him to hold it so he can read]

[Catherine writes in the notebook]

CATHERINE  What do you say, Kasuf? Will this take us home? Come on, let's go. Hold on.

If Brucke didn't have these in his journal, then he'll need to come here before he leaves.

I really hate to do this.

[Catherine strikes the stele with her foot to break it.]

[The end of the stele falls and Catherine knocks on it to destroy the symbol. She covers it with sand and stands up]

[They enter the room and James leads]

MOTAWK My people will take this away. Our labor will never benefict that bad man who robbed us of Aset.

WASIF He says that...

JAMES Yeah, I got it.

WASIF I've been thinking about what you said back in Cairo.

JAMES Yes, you should give up playing dominoes?

WASIF  That love occurs when you least expect it.

JAMES  Now? You want to debate this now?

WASIF  No, not debate.

JAMES Trust me, love has a way of sneaking up on you.

CATHERINE James! I got it.

CATHERINE We can go home.

CATHERINE And I destroyed the only carving. That son of a bitch is never getting out of here.

CATHERINE Unless Aset opens the gate for him.

CATHERINE We need to act now.

BRUCKE Now, what shall be done with you? Your translation work has been excellent. Better than expected. Perhaps, therein lies the answer. Why not remain here, doing what you love? A bridge between our two worlds. Don't thank me. Tell her.

LANGFORD You show great power. Now show great wisdom. Brucke will turn his back on you. Dangerous. He is dangerous. Treacherous.

BRUCKE  That didn't go over so well. What did you tell her?

[Brucke knocks Langford down. As he falls, Langford drops Catherine's hair clip. Brucke picks it up]

BRUCKE Catherine's hairpin? Where did you get this? How is this here?

LANGFORD I am not a treacherous.

BRUCKE  What are you doing? He's mine!

LANGFORD  You should've studied languages. They certainly do come in handy.

BRUCKE What did you tell her?

LANGFORD  Catherine is here, and I doubt she came alone, you Nazi son of a bitch.

[they start to fight. Serqet wants to intervene but Aset stops him]

ASET Serqet. They prefer to fight their own battles.

[Burcke and Langford continue to fight. Eva films the fight. Suddenly, Burcke points his gun at him]

LANGFORD  You turned your back on humanity. You're no God. You're not even a man.

BRUCKE  Well played, Professor. You've grown a nice little spine for yourself. Unfortunately, it ends now. You have to die.

[Suddenly the room goes dark. A goa'uld mothership descends on the temple. The baby starts to cry. Aset stands up]