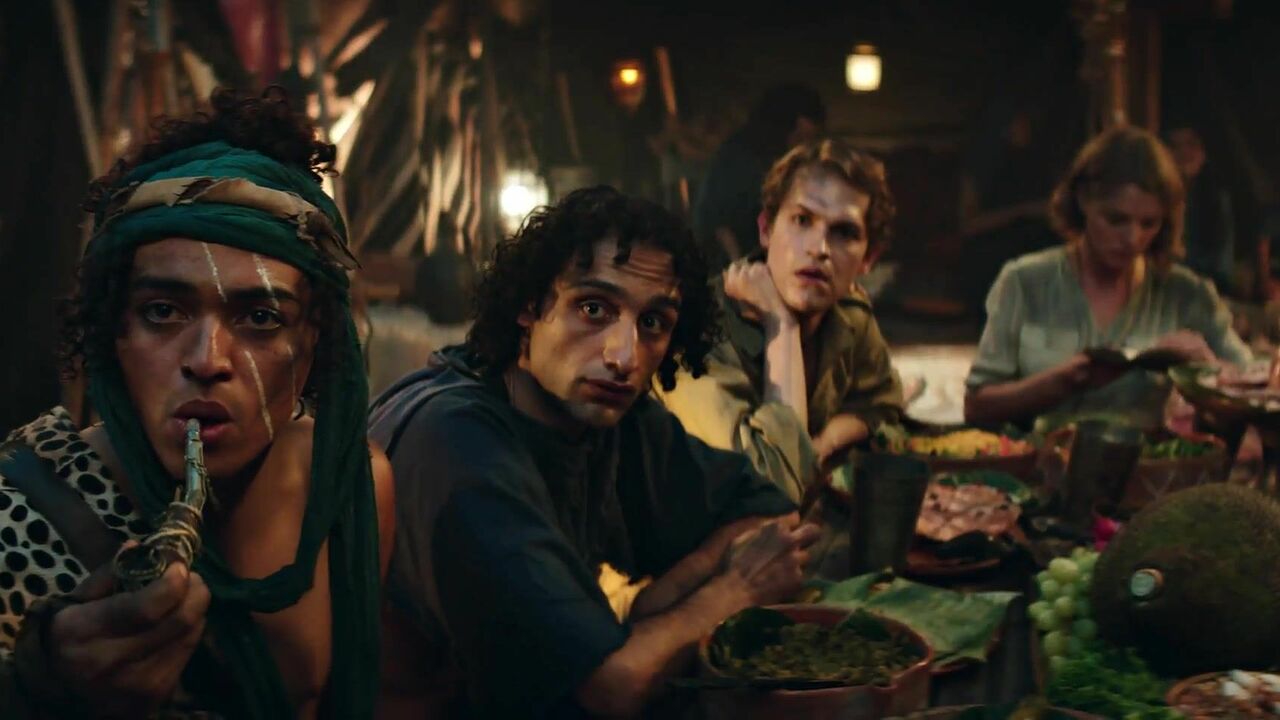 BRUCKE This? This is all she offers?

[Brucke holds a piece of naquadah between his fingers]

[Aset looks after her baby, sitting on the throne]

And she thinks I will march back home and flaunt for the adoring masters, her precious gift of a rock?

BRUCKE What was that?

BRUCKE  Yes, I heard. What does it mean?

LANGFORD  Well, Nagada was a city in ancient Egypt, also known as Nbwt.

[She gives her baby to her nurse and stands up. She speaks in her language]

[Aset hands them a knife]

BRUCKE  Yes, yes, this is very nice. Do I get this as well?

[Serqet takes the blade and hits a huge rock with it. The blade shatters]

[Serqet brings her spear to Aset]

LANGFORD This staff has Naquadah.

[Eva continues to film. Aset hits the rock, it breaks in two. The blade is intact]

BRUCKE Youth and beauty, forever? Imagine the power to grant eternal youth... or life. An everlasting Reich of my own! Don't look so worried, Professor. Perhaps I will grant you the gift of immortality, to serve me by my side, and watch how my empire grows.

[Kasuf grabs the plate the guard hands him. They are all around a table full of food. Kasuf smokes a pipe]

[Wasif and the guard look at each other. The guard invites Wasif to eat. Wasif eats but spits in his hand before the guard looks]

JAMES What I wouldn't give for a shepherd's pie. Any of this look familiar to you?

WASIF You must be joking.

JAMES Sorry. It does look a lot like Egypt.

[Catherine feasts on the food]

WASIF Not the food.

KASUF Emissaries of Ra are most welcome. Aset will be most pleased. Many blessings on you and our friends!

CATHERINE Blessings to you, Kasuf.

[Kasuf hands the pipe to Catherine].

JAMES How are you doing this?

CATHERINE It's remarkably similar to ancient Egyptian. Once Wasif told me the Coptic vowel placement to listen for. Try this. No, it's good. My father, he's the real expert. Imagining what the language of the pharaohs would've sounded like has long been a passion of his.

[She hands the pipe to James. He smokes]

CATHERINE I always thought it was a complete waste of time. That's why Brucke took him.

JAMES  What do you mean?

CATHERINE He must've known my father would understand the language here.

JAMES How could he have known that?

[Catherine looks in the notebook]

KASUF ... and has given her power to watch over us. Our goddess Aset!

[The Abydosians applauded. Wasif and James too. Catherine still looking at the notebook]

[he hands the pipe to Wasif].

[Wasif takes a deep breath from the pipe].

GUARD #1 My name is Motawk.

CATHERINE He knew enough to open the gate in the first place. It's not crazy to think he knew what he may have found here. There are glyphs in here that I've never seen before, which believe me, is rare.

KASUF The power to heal was gifted to us by our goddess! The Wand of Horus. And we reward Aset with great loyalty!

CATHERINE What if I've never seen these before because they depict what happened here, on this world, not ours?

CATHERINE This is about more than saving my father. The power to heal, the weapon we were attacked with. If the Nazis got a hold of any of this...

CATHERINE  We need to stop Brucke. Okay. We need to go. Kasuf! Kasuf!

CATHERINE Damn it, that's not what I meant. Okay, we need to go.

CATHERINE  We need to go now, we need to leave now.

JAMES Cat. Cat. Play this smart, it's pitch black out there. All right. Let's settle. Tonight, we make friends and allies with these... fine people.

[They all raise their glasses]

CATHERINE And tomorrow we beg them to join our cause and save our planet from unimaginable darkness and destruction.

CATHERINE  Or we at least get our guns back.

BRUCKE  Dearest members of the Vril Society, I bring good news. Proof that our theories were correct.

[He approaches the throne where Aset is sitting with her baby in her arms.]

BRUCKE  Come, meet Aset, the God who rules this world.

BRUCKE She has given me the power that we have been tirelessly looking for. The elusive Vril.

[He shows a piece of Naquadah in his hand, proudly]

BRUCKE In return, I will deliver multitudes of our undesirables...

BRUCKE ... to toil at her command. A bold and prosperous partnership.

EVA And a triumph for the Fuhrer.

BRUCKE  Yes, yes, that as well. Perhaps now he will fully appreciate. As will the rest of the world. Soon, every mortal shall bend the knee, and worship at the feet of the almighty...

JAMES Beware, that is the man who likes to stab you.

[James looks at a piece of Naquadah in his hand.]

JAMES I found this. It's... dark and beautiful. Like you.

CATHERINE It's a rock.

[Catherine smiles and puts the pebble back in her purse.]

JAMES To replace your magic stick.

[They laugh. They hold hands and Kasuf clears his throat]

JAMES What are you two on about?

CATHERINE I think he just offered us his tent for the evening. Are you nervous?

[James dips his finger in a dish and tastes it]