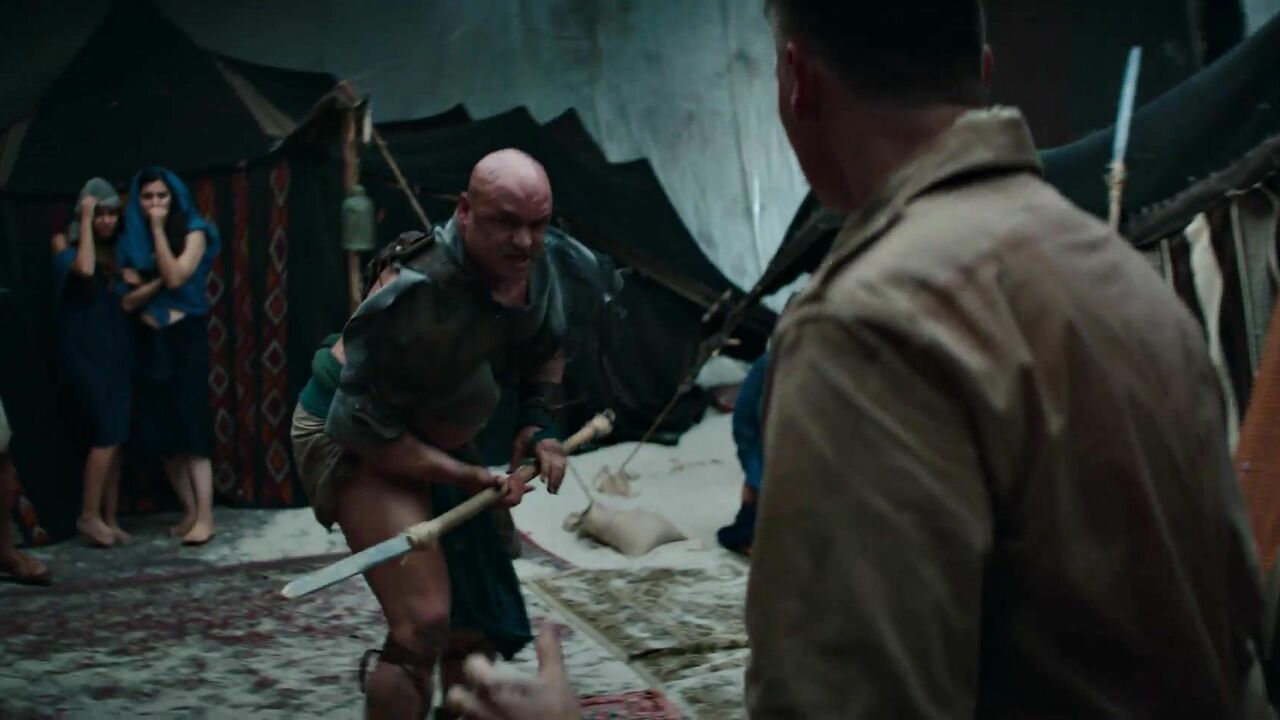 [A bell rings, Catherine wakes up. James is looking out and puts a finger over her mouth to tell her to be quiet]

ASET This an outpost of my most loyal subjects!

[The Abydosians kneel before her. Catherine goes to dress, Kasuf returns to the tent to warn them. He hides his eyes from Catherine]

CATHERINE What? Out there? That is Aset?

[Outside, Brucke, Stefan, Eva, Serquet and Langford can be seen. Eva films Brucke]

BRUCKE This tiny outpost could use a bit more manpower.

KASUF She is a great hero! A Goddeess and a friend. Come! Come!

KASUF Ra has show her many mercies! She will welcome you.

JAMES Damn it! Cat! Your father.

[Catherine sees her father, James holds her back.

CATHERINE Let go of me.

STEFAN Is our great honor to present to you...

KASUF ...  more royal guests from beyond-

[Stefan turns around and violently pushes Kasuf to the ground. The Abydosians are shocked. Kasuf is terrified]

BRUCKE But are they really willing to serve?

[Serqet whispers something in Aset's ear].

BRUCKE Do they revere you enough to fight for you? To die for you?

LANGFORD An impressive display. But who here is truly wiling to... willing to serve? Do any of your people fight for you to death?

ASET My people are strong and well trained. Unlike your foolish dead soldier.

LANGFORD  Her people are strong and well-trained, not like your stupid dead soldier.

[Aset laughs. Brucke slaps Langford hard. In the tent, Catherine starts to have tears in her eyes]

BRUCKE A test then, say it.

BRUCKE A test, a friendly game, to highlight obedience and willingness to serve the cause. Stefan. (speaks quietly to Stefan) You will fight with a knife, yes?

[Several abydosians volunteer. Wasif holds Motawk back. Kasuf wants to go but Catherine and James hold him back]

JAMES Not this time.

[The abydosian breaks Stefan's knee. Stefan is on the ground and throws sand in his eyes. They continue to fight]

[They continue to fight. The abydosian has the advantage and is about to deliver the coup de grâce. Brucke pulls out his pistol and fires. The abydosian falls to the ground, dead. Everyone is shocked. The abydosians start to cry for the dead man].

[Brucke presses with his foot on Stefan's knee. We hear bones cracking and Stefan screams in pain]

ASET It is only fair. For your slave in the temple. You overstep again, you will die.

LANGFORD She has allowed this outrage... because she earlier killed Gunter.

[Brucke pushes Eva slightly. He aims at Stefan with his gun. Stefan begs him but Brucke shoots him in the head]

BRUCKE We must assert our power, lest we lose it. Flex our might or be seen as weak!

[Eva stops filming, she has tears on her cheeks]

BRUCKE Did you get that last bit?

[He wants to touch Eva's face but she pulls away.]

BRUCKE Was it my good side?

EVA You have no good side.

LANGFORD You're a monster.

BRUCKE No, my friend, I am a God. Fear not, everyone, for I shall replace this loss with thousands upon thousands of slaves! The desert shall be filled forever!

LANGFORD This man will be covered, no replaced... by... I can't remember the word for thousand.

LANGFORD by a desert full of slaves...

BRUCKE As long as Aset will have it.

LANGFORD If you would have it?

[Kasuf leaves the tent and runs to get the healing stick.]

[Aset takes the stick and puts it in the air]

ASET I can give.

ASET As easily as I can take away.

[She breaks the stick in two. The abydosians start to cry. A tear runs down Aset's cheek. She throws the stick on the ground, Kasuf is shocked. Serqet hits Kasuf]

SERQET He died with honor. He died for your queen.

[Eva puts away her equipment]

CATHERINE That son of a bitch. Wasif, get our guns now. Beal, we need to go.

[her voice breaks and James comes to embrace her]

JAMES Hold on, hold on.

CATHERINE No. That man, he deserves to die. Did you see what he just did?What do you think he'll do to my father?

JAMES I understand, but we had better think this through.

KASUF He is a bad, bad man.

JAMES What did he say?

MOTAWK He has turned Aset against us.

[Motawk gives her weapon back to Catherine]

MOTAWK Make him go away.

JAMES What... What did he say?

CATHERINE I think they're asking us to help them destroy Brucke.