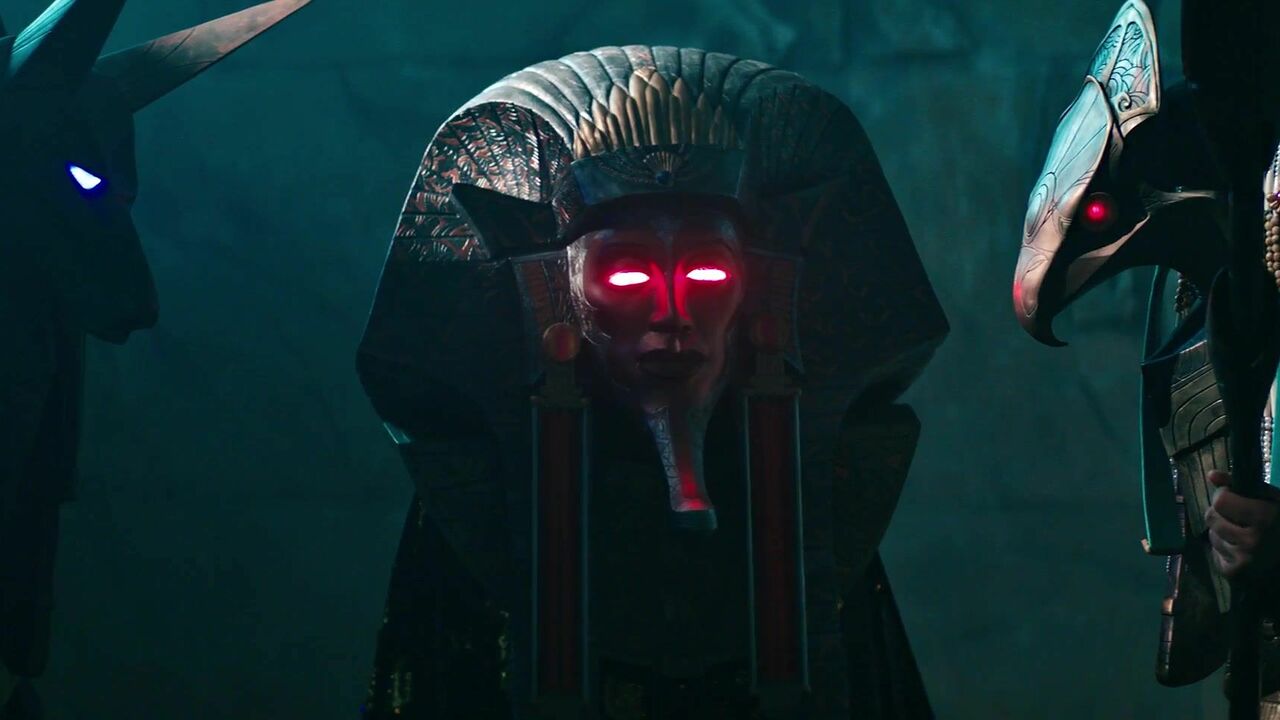 BRUCKE  You've grown a nice little spine for yourself. Unfortunately, it ends now. You have to die.

JAMES We need to get out of here.

CATHERINE Not without my father. Here, Brucke's journal, just in case.

WASIF I tried to tell you.

JAMES When you least expect it.

KASUF What the fuck? Come on!

LANGFORD Shoot me now, and you lose your voice here.

BRUCKE It does not matter now. The deal is done.

[Catherine appears and points her gun at Brucke.]

CATHERINE Get away from him.

CATHERINE  I told you there is nowhere you could hide from me. Now let him go.

CATHERINE Or I pull the trigger.

BRUCKE  No, I don't believe you would, you see, I have the power...

BRUCKE You can't harm a God.

[she fires again. Eva continues to film. Brucke's gun falls to the ground and he collapses on the floor]

BRUCKE You need to realize who you are dealing with.

BRUCKE  Nazis are nothing. Hitler is nothing. I have no longer any need for them, not when I have this.

[He shows a piece of Naquadah in his hand]

CATHERINE I told you I'd hunt you down.

[She reloads her weapon, ready to fire]

[His father touches his shoulder]

LANGFORD He's not worth it.

[she lowers her weapon. Her father retrieves the weapon from Catherine's hands and embraces her]

LANGFORD  I've been so worried about you.

CATHERINE I know, I-

BRUCKE  Weakness. I'm surrounded by it.

BRUCKE I am strong. I cannot die.

[He points at Catherine and her father but Eva shoots him several times. Brucke falls to the ground]

[The camera continues to roll, then stops. Serqet is about to shoot Catherine and her father but James intervenes and shoots her]

CATHERINE Open the gate, James, the new sequence is in the journal. We're right behind you.

LANGFORD No harm from us comes to you. Let us return home.

ASET I cannot release you.

ASET She is your daughter?

[James enters the Stargate room, and begins to dial the address of Earth with the help of the notebook]

ASET You are unlike the others but you still pose a danger. You will remember nothing of this.

ASET You will forget the language of the Gods.

[Catherine pleads with Aset but Aset uses the goa'uld ribbon bracelet on her too].

ASET Your time here will remain a fog.

[Kasuf wants to intervene but suffers the same fate].

ASET Go to the city and lead the people of Nagada. You will return to Earth and assemble a team to one day return through the Stargate with a power great enough to destroy Ra.

[Catherine's nose bleeds from the torture and she starts to forget]

ASET You shall mark this team with your Eye of Ra pendant.

LANGFORD This is your legacy as well. Catherine, I hope you realize you don't have to leave Egypt on my account.

[Catherine is confused. A tear runs down her cheek. She looks at her hand and then notices that her nose is bleeding. She touches her father's shoulder]

[Kasuf stands up. Suddenly the transport rings are activated.]

RA Aset. I have come for you!

[Catherine touches her necklace. She is still confused, her father too. James comes over to them]

JAMES Cat! The symbols, they worked!

[He kneels down in front of Catherine, puts his hands around her face, worried]

JAMES Oh, my God. You all right? What happened?

JAMES It's open. We can go home.

ASET Get her to safety.

RA Allowing your resurrection was a mistake. Serqet was right to warn me.

ASET Allow me to explain.

RA Explain what? How the Earthings reopened the Stargate? How you kept that from me? Your intentions are clear. And now...

[He reaches out to the baby and the baby starts to cry.]

RA a forbidden Harcesis child? Your defiance of me is boundless.

SERQET You choices were hazardous. I regret nothing. For my loyalties, I shall be greatly rewarded.

[James points to the activated wormhole in Catherine.]

JAMES We can go home.

JAMES She's coming. Get down.

[Serqet fires her spear. James returns fire with his weapon. Catherine and her father cover their ears]

[Heinrich looks at the activated wormhole and gives a Nazi salute]

[Serqet fires, the blast goes through the wormhole]

[Serqet fires, the blast goes through the wormhole]

[James takes cover behind a wall]

[Ra uses the goa'uld ribbon bracelet on Wasif and Motawk]

RA So able bodies. So many years of servitude before you...

[Ra helmets are installed on them]

[James continues to shoot. He grabs Catherine and her father, and pushes them through the gate. They pass through the wormhole but Serqet knocks James down before he can get through]

RA (voice) The Stargate must now be moved. The dialing device must be repaired. This temple is corrupt.

[Mothership fires on the temple]

RA (voice) Once again, I alone shall rule.

[the shot reaches the temple and it is destroyed].

[Mothership fires on the Abydosian camp]

[abydosians look up in panic]

[the shot reaches the camp and it is destroyed].

[Kasuf heads for the city]

AMERICAN AGENT MAN Well, I guess they were lucky. Whatever it was they were working on ended up killing that Nazi, and, apparently, wiped both of their memories.

AMERICAN AGENT WOMANThe doctor did seem convinced that the memory loss was genuine.

AMERICAN AGENT WOMAN Regardless, that cable that we intercepted from Berlin, suggests these Germans are keen to acquire whatever this thing is.

[She notices that Langford is there].

LANGFORD This thing... is my life's work, thank you very much.

LANGFORD It's possible, but I don't know.

LANGFORD Captain Beal again. I don't remember ever meeting him.

AMERICAN AGENT WOMAN James Beal, has he contacted you?

CATHERINE I don't know anyone by that name, but I do recall meeting James at the market.

He was handsome. We made... I believe we made plans to meet again.

AMERICAN AGENT MAN He isn't the type to simply go AWOL. If you can remember anything even if it seems trivial, please contact the British Embassy when you arrive in the States.

AMERICAN AGENT WOMAN We'll leave you to your packing.

AMERICAN AGENT WOMAN My! That is a beautiful necklace.

CATHERINE Thank you, I always thought it might bring me luck one day.

AMERICAN AGENT MAN Apparently the Germans have been funding them for years...

CATHERINE  I do hope they find James.

LANGFORD Oh!  I found this... lying next to the ring. So unique.

[Catherine takes the piece of naquadah from her father's hand.]

CATHERINE  It's mine, I believe. For the life of me, I... I can't recall where I found it.

LANGFORD Well, I can't believe it's all over.

CATHERINE Something tells me it's only just beginning.

[her father places a kiss on her cheek]

[She looks around, then turns around, starts walking and examines the piece of naquadah between her fingers]